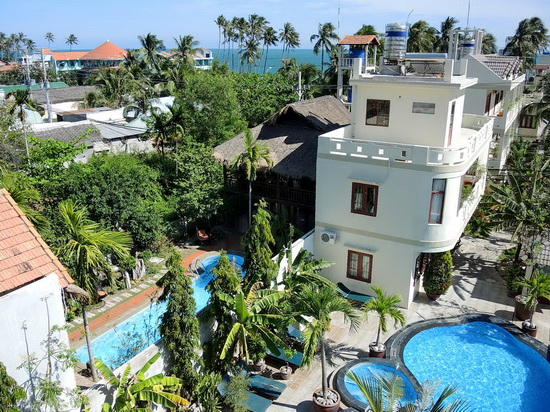 Here is one of many dozens of resorts in Muine, Vietnam, with amazing value. My room in this one was $15 a night. I had cable TV, Wifi, fridge, A/C, a great view and a gorgeous pool. Actually I took this picture from my balcony.

This was not a steal of a deal special bargain. This was the regular room rate. Ok, it was a single room. For a double I would have had to pay $18. But even if you had to spend a little more you could still live like a king on a small budget.

A dinner can be had for $3 (not including drinks), and a 4 hour jeep tour to various attractions costs $6. Sure, you can splurge and spend a lot more on fancier rooms and dinners, but you don’t have to. 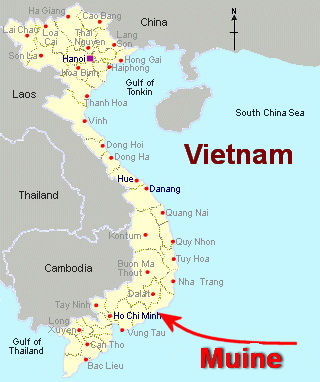 Vietnam is rapidly becoming the newest economic power house in southeast Asia and one of the hottest tourism destinations.

The country is very long and very narrow with dozens of micro climates.

Most of Vietnam is hot, tropical and sweltering for most of the year. However the north as well as the mountain zones can get quite chilly during the winter season.

One area has an unusual climate which you would not expect to find in a tropical country.

This is a stretch of desert dotted with sand dunes and shrubbery that you typically see in the desert areas of the world. It is located next to the beach resort town of Muine of southern Vietnam.

Muine is one of the hottest destinations for Russian tourists who are escaping their frigid home country. Most restaurant menus and shop signs are in Russian and English, and many Russians are working in the tourism industry in Muine.

The next biggest tourism influx is from neighboring China. There are also a fair share of Europeans and Americans, often backpackers who are travelling the length of the country. Many plan to use Muine as a quick stop over and end up staying much longer. 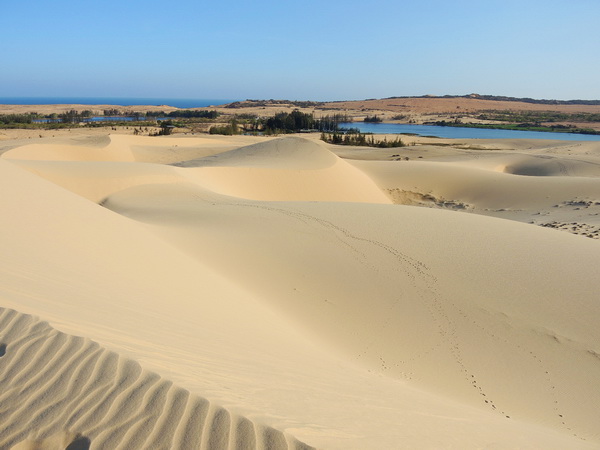 Muine is famous for it’s gigantic sand dunes which come in a white and red variety. I took one of the popular $6 jeep tours where I shared the vehicle with an international mix of tourists.

One woman was originally from Vietnam but had escaped to the United States during the times before Vietnam opened its doors to the world.

One couple was a Turkish man with his Thai wife who were both living in London. On the seat next to me was a young Israeli who had just finished his compulsory army training and wanted to live it up before staring a career and family.

Then there was myself, born in Germany, US citizen and resident of Thailand. The group was rounded out by a British couple on a world tour. 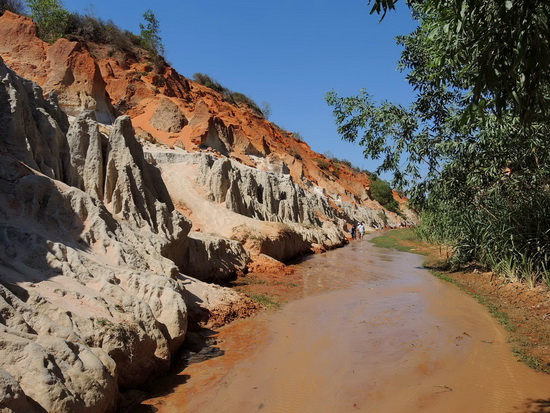 The first stop on the tour was this picturesque canyon where we waded through the shallow creek and ended up at a waterfall. 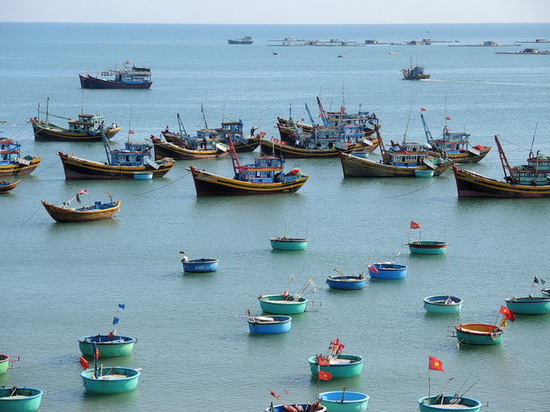 The next stop was the fishing fleet of Muine. Those round bathtub shaped boats are the smallest version of fishing boats. They are outfitted with an outboard motor or are human powered with a paddle. 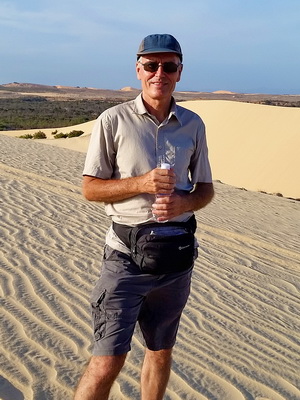 The final two stops were the sand dunes which was quite an adventure. It was very windy which masked the heat but blew the sand all over you.

If you dropped something it was quickly covered by sand, never to be seen again.

After a hike through the white sand dunes we watched the sunset at the red sand dunes before returning to town with it’s various attractions.

Muine is an 18 km long stretch of one single road which is lined with resorts, restaurants, shops and bars. 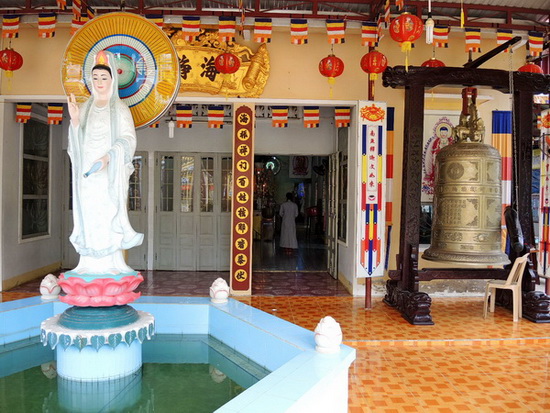 However there are still signs of Vietnamese culture like this temple with it’s gigantic gong.

I was lucky to catch the perfect timing for my visit which was in March. It was not too hot during the day and just perfect at night – not too hot and not too cold – just right. 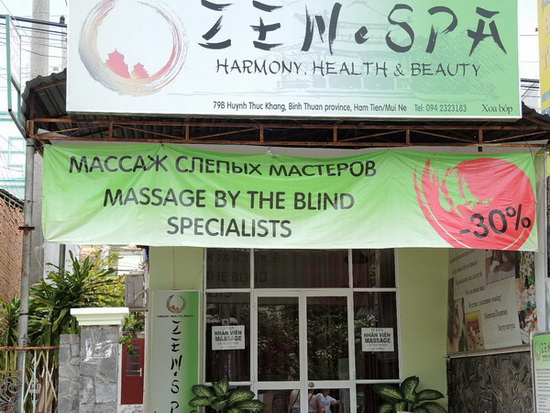 The evening is a pleasant time for getting a massage. There are dozens of spas and massage shops. This one is unique since it is staffed by blind therapists. Several Asian countries have government sponsored programs to teach the blind massage.

Massage in the western world is a luxury and often costs between $50 and $100 per hour. However in Muine you can get a one hour massage session for around $10.

I had planned to spend a couple of days in Muine and ended up spending more than two weeks. The place can grow on you. The prices are very affordable, even by Asian standards. There is a large variety of food, even plenty of vegetarian food which is perfect for me.

Muine is a laid back place. Nobody is in a hurry, the Vietnamese people are friendly and there is a good size international expat community to get to know and hang out with.

Your money can go a long way if you are frugal or you can live it up in luxury without breaking the bank. If you are on a budget you can have a great time in Muine for $25 a day including accommodation and food.

If you double or triple this, you can have a wonderful experience which you would never find in any western country for so little money.

Vietnam is one country where your western money goes a long way. Infrastructure is good, transportation is easy and there is lots to do and see.

The author, Shama Kern, has been living in Thailand for over a decade with his Thai wife. He has traveled extensively all over southeast Asia. You can reach him at shama@shamakern.com