Singing the praise of Chiang Mai

I live in Chiang Mai, Thailand, one of my favorite cities in Asia. Why?

The cost of living is one of the most affordable in Asia. You get great value for your money, there is lots to do, and people are friendly.

The pace of life is pleasantly slow, there is great mountain scenery nearby, and the weather is generally quite good.

On top of all that Chiang Mai is one of Asia’s major healing arts and holistic hubs.

But…..There is one big catch!

HELP – I cannot breathe (or would not want to)

Every year by around mid-February the air quality takes a nose dive. The agricultural slash and burn season begins, and for the next two months the mountains around Chiang Mai are literally on fire while all the farmers are burning off their fields to prepare them for planting.

The result is an ugly haze of smoke that covers not just Chiang Mai but all of northern Thailand. It makes your eyes burn and your lungs hurt. Combined with the intense heat of this time of the year and the usual traffic pollution, it turns an otherwise great city into a place that is very unhealthy and best to be avoided.

Once the burning stops and the first rains of the rainy season appear, normally in May, Chiang Mai turns into a great place again.

What can I say, it’s my home, my favorite city in Thailand, but in March and April I have to get out of there. This year I went just across the border into Malaysia, to an island called Penang. Malaysia is not such a famous tourist destination like Thailand, but Penang can easily compete with Chiang Mai in most respects.

The biggest bonus is that it is an island, there is no burning, and the surrounding ocean makes sure that the air quality is always quite good.

How is Malaysia different from Thailand?

There are some major differences that I want to point out here. Thailand is primarily a single culture of Thais.

Malaysia is a mix of cultures – there are the Muslim Malays, the Buddhist Chinese, and the Hindu and Muslim Indians.

Malaysia had been a British colony which has influenced culture and life style whereas Thailand had never been colonized.

Malaysia has a multitude of completely different languages. The national language is Malay, but English is compulsory in Malaysia’s educational system and is spoken widely.

Here in Penang you hardly ever encounter anyone who does not speak at least some English, and many people speak it very well.

In contrast, Thailand has one language, Thai, with regional variations. In the major tourist centers you can get by with English, but outside of those centers English is hardly spoken at all.

Thailand makes a clear distinction between Thais and foreigners. There is even a word for non-Thais: farang. However in Penang there is such a mix of races, religions and cultures that it is a big melting pot. Nobody sticks out as strange or unusual.

Then, in stark contrast, you see other women wearing tight shorts and tank tops. Part of the mix are the expats and workers from many Asian and western countries.

Wherever you go you will hear a smattering of different languages, Chinese Mandarin, Cantonese or Hokkien, Indian Tamil or Hindi, and various dialects of Malay.

All of these languages are liberally mixed with English words and sentences. You might hear a Radio announcer speak in Malay, but suddenly there will be some words or sentences in English, all without missing a beat.

A whole new way of English speaking and writing

The national Malay language does not have words for many modern concepts.

Therefore they came up with an ingenious idea. They just use the English words, but spell them exactly as they are spoken.

If you think about it, the way how English is pronounced has often very little to do with how it is spelled.

Look at the letter -A- in the words ‘ball’, ‘carve’ and ‘lap’. Or the letter -U- in ‘bull’ and ‘but’. These are totally different pronunciations for the same vowel which is confusing to say the least. 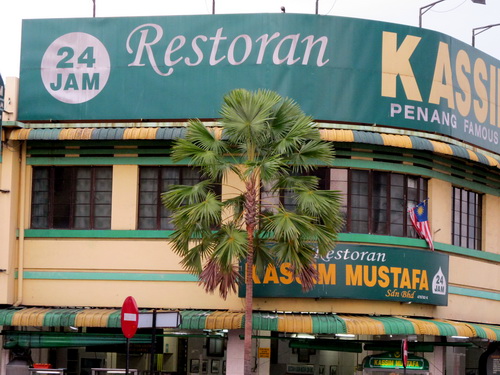 The Malays solved this problem. Police becomes Polis, restaurant becomes restoran, motorcycle becomes motosikal, and ferry turns into feri. Everything is written exactly as it sounds.

I wish we would adopt this concept for the English language instead of torturing our school children with memorizing all those words that are spelled nothing like they are pronounced.

Many Malays have worked in other countries and are quite familiar with other parts of the world. They love striking up conversations with you about all kinds of topics. In typical south-east Asian fashion, life in Malaysia is slow and relaxed, a refreshing difference from western more stressful and hectic cultures.

Some of the most interesting architecture in south east Asia

Back to Penang island. Malaysia used to be a British colony, and it all started here in Penang. There is such a variety of beautiful and impressive architecture that the island’s capital of Georgetown has been declared a national heritage site by UNESCO. There is European influenced architecture, Christian churches, beautiful Muslim mosques, impressive Hindu temples and elaborate Buddhist shrines all mixed with colonial mansions.

As close to  food heaven as it gets

While the island has a distinctive Asian charm, it is far from a third world environment. There are huge modern malls, an excellent air conditioned public transport bus system, and of course a multitude of restaurants from all over the world that make Penang a true culinary heaven.

This is great for me as a vegetarian since many Chinese and Indians either are vegetarians or like eating vegetarian food. Just around the corner from my hotel there are 3 Indian vegetarian restaurants within one block in the colorful ‘Little India’ district. As an additional bonus the prices are very affordable. My dinner today in a nice restaurant cost me about US 3.-

Penang has many attractions

There are plenty of attractions in Penang aside from the architecture like water sports, mountain hiking, a national park, a spice garden and a botanical garden.

People are very friendly and helpful, there is very little crime, and the weather is warm to hot all year round, tempered by a refreshing ocean breeze.

So if Penang is so great, why would I want to return to Chiang Mai? There is one big reason.

Some of the best and cheapest massage in the world

Chiang Mai has a definite edge over Penang when it comes to the availability of massage at some of the most affordable prices in the world.

Although there is massage available in Penang, it is either of the vigorous Chinese variety, or imported Thai Massage by Thai women, both at much higher prices than in Thailand.

There is something about those leasurely strolls through Chiang Mai’s Sunday market where you can sit down in a recliner right on the sidewalk and get a great one hour foot massage for US $4.- while you relax and watch the world go by. Or getting a two hour full body Thai Massage for $10 to $15 per session. I don’t think any place in the world can beat that.

Penang, Malaysia, turned out to be a great choice for my escape from my seasonally polluted hometown of Chiang Mai, Thailand. The two cities are both great choices. Part of the year in Chiang Mai, and a few months in Penang could just be my ticket to a good climate year round and a good dose of fascinating multi-cultural variety in those two neighboring countries.

The author, Shama Kern, is a long time resident of Asia. Most of the time he lives in Chiang Mai, Thailand, and part of the year he travels in other southeast Asian countries.
You can reach him at shama@shamakern.com

14 thoughts on “A Peek Across Thailand’s Border Into Malaysia”