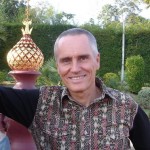 People ask me all the time: “How did you end up in Thailand?” The truth is that it was nothing planned at all. It just happened.

I have to admit that moving to another country was not such a big deal for me since I had lived in eight countries  previously during my lifetime. But the big deal is that I never stayed in those countries for long, but I have been in Thailand for well over a decade now. 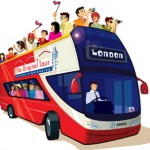 So how did it happen? During the 90s I used to work as an international tour guide. It was my job to show people the world – by bus, by train, by plane, or by cruise ship. Tour guiding is a seasonal job. Mostly you work a lot during the summer season and take the winter off. People like to travel during the nicest season, not when it’s cold and rainy.

So I made my money during the summer season, and then went somewhere cheap to spend it. If you make your money in dollars and then spend it in pesos or Thai baht, your dollars go a long way. But if you stay in dollar land, you can go through them quite fast, especially when you are not earning any. 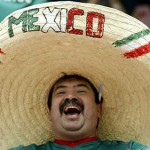 For years my off season destination was Mexico. That was when it was still really cheap there and before there were major drug wars going on.

But still, after 6 winters in Mexico I thought that I  should try out a different destination. Where would I go? Europe is expensive, Australia is expensive, I had no attraction to Africa, so that left me with Asia. I knew Asia has a warm climate and is cheap and exotic. 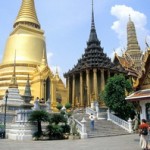 I looked at flights to various Asian destinations, and Bangkok, the capital of Thailand, turned out to be the cheapest. There you have it – that was my entire decision making process.

In those days traveling was still quite easy. It was pre 9/11, most people did not have mobile phones yet, and hardly anyone traveled with a laptop and a bag full of cables and accessories. You could even take a bottle of water on the plane – imagine such a prehistoric concept!

I landed in Bangkok with no plans and no itinerary. I did have a Lonely Planet guidebook so I could make it up as I went along. It looked great. Food, travel and accommodation was really cheap.

In those days the dollar was strong and the Thai baht was not so strong. That was a great combination since I got 45 baht for one dollar. In comparison today, in 2011, I only get 29 baht for my dollars. In other words the dollar lost 35% of its purchasing power since then in Thailand.

Or you could say that I was 35% richer back then. Add the fact that in those days prices in Thailand were much cheaper than today, and I could really live very well on a few dollars. Timing was just right, it was my lucky streak. 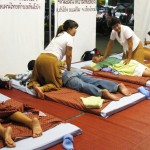 One of the first things I noticed was there were shops everywhere offering Thai Massage. What in the world is Thai Massage? I had never heard of it before. I tried it and immediately liked it.

First of all it is very convenient. You can keep all your clothes on (or you are given comfortable  massage clothes to wear) and just lie down on a simple mat. Not only is privacy not an issue, but the massage shops are often a lively social scene.

Second I liked the fact that Thai Massage originally comes from yoga which I had been practicing off and on for most of my life. Many times I was too lazy to practice yoga, but here in Thailand I could have someone give me practically a passive yoga session. How convenient. That’s why some people like to call it “lazy man’s yoga”.

Back in those days the going rate for a one hour Thai Massage was less than $2.50 an hour. Who could NOT afford that! Today, 12 years later, the prices have doubled which is still quite affordable.

Thai Massage became a love affair for me. I took a course, then another one, and soon most of my time was spent studying and practicing Thai Massage. But that’s the beginning of another story. I will save that for next time. For now you know how I ended up in Thailand.

11 thoughts on “How did I end up moving to Thailand?”