This is not a story about tourist attractions in Malaysia, temples, cultures and festivals. It is a very human story, something that happened to me, and something that changed my way of thinking.

When I arrived in Penang, Malaysia, I spent quite some time looking for a good and reasonably priced accommodation.

Finally I found the brand new and very clean Tower Budget Hotel which has a friendly helpful staff that made me feel like I was part of a  family and not just some stranger.

Also the location is perfect, right next to Little India, the most colorful part of Penang and my favorite area in this city.

But then something happened that made me wonder where I had ended up, and a peculiar story started to unfold.

When I first moved into my room, I looked out of the window and to my dismay saw a real bum occupying the sidewalk right across from my window.

He looked downright scary, was clearly drunk, and obviously had set up his permanent residence on the sidewalk. 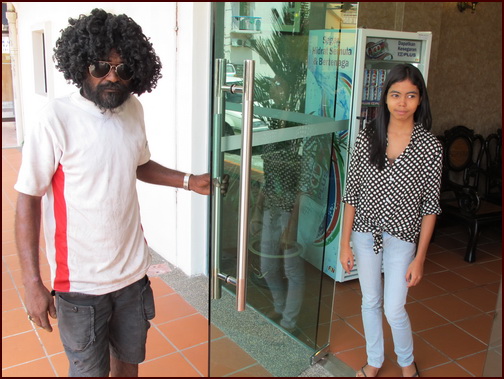 However when I came to the hotel, he was sitting next to the entrance and jumped up to open the door for me.

I thought that for sure he was going to ask me for money, but he did not.

When I asked the hotel staff what this was all about, I learned that the bum had worked as an electrician and was fired for a drug offense.

Under Malaysia’s strict laws he ended up with a criminal record that makes it very difficult to ever being hired again by anyone for the rest of his life.

He had no family left, took up residence on the side walk and became an alcoholic. Up to this point, there is nothing so unusual about this story.

But here comes the interesting part. This man, Mat is his name, never asks anyone for money, and despite being  drunk most of the time, he is never aggressive. Just the opposite, he is friendly, helpful, totally honest and even trustworthy. He takes out the trash of the hotel, cleans the sidewalk and opens the door for the guests. So the hotel staff kind of adopted him as part of the scene.

Would you believe that this is the same person? Mat has a fascination for the singer of the famous Malaysian band Alleycats and wears a wig that resembles his idol’s hair style. But Mat cleans up pretty good in one of his saner moments. He even has two mobile phones.

Mat is crazy, drunk, and I can hear him yelling and hollering at nobody for no reason at all hours of the day and night in his hoarse, high pitched voice. But when I talk to him, he is always friendly and it is obvious that he has a good heart. He seems to like his freedom of being able to be outrageous and not having to conform to anything.

Somehow he manages to hold down up to  two jobs: He collects and sells recyclables, and he sells an assortment of things at a local flea market.

Although he speaks some English, I can only understand about 10 percent of what he is saying.

One day I went with him to the flea market to see what he is doing. Apparently he is friends with lots of people there.

He also insisted to buy me a (non alcoholic) drink from a vendor at the market. 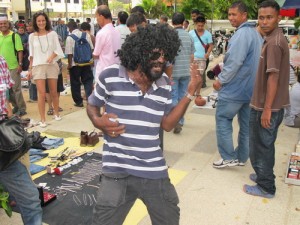 Here he is in “Alleycats performance mode”.

Everyone stares as he is dancing around in his drunken and totally careless and oblivious state.

But at the same time he somehow manages to also be funny and likeable.

He is part of the scene at the flea market, and he is probably the most interesting character there.

He adds a unique flavor to the flea market and quite a few people become friendly with him.

Although he is quite crazy, he is also a genuinely friendly and helpful, and even quite happy person.

The hotel staff is the closest thing to family that he has.

And now he has become my buddy as well, and he is always happy to see me.

I never had a bum-buddy before. That’s a new one for me.

I found out that people regularly give him money  without him asking for it.

Despite his drunken stupor and crazy behavior there is actually a kind  person with a good heart underneath all that, and some people notice that.

My lesson in all this is that from now on I will be less quick in judging people by their exterior, no matter how crazy they might appear.

And I found out that it is possible to learn something from a drunken bum, namely that kindness and a good heart can be found in the most unlikely people, even in a crazy bum. Who would have thought!

The author, Shama Kern, is a long time resident of Thailand and southeast Asian traveler and writer.

You can reach him a shama@shamakern.com

7 thoughts on “The Unusual Story of a Bum in Penang, Malaysia”