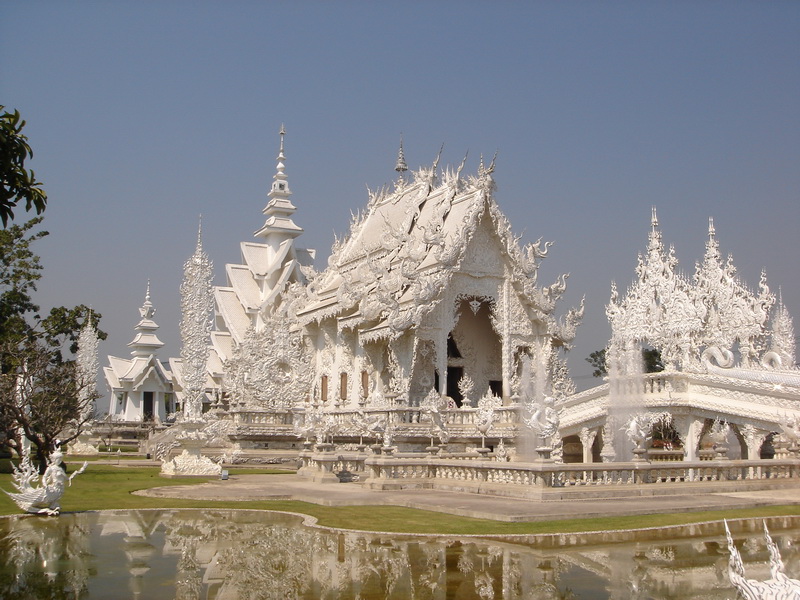 When you live in Thailand for extended periods of time, most visa types require you to leave the country on a regular basis in order to get a new stamp in your passport. The closest border to Chiang Mai, where I live, is the Burmese border in the very north of Thailand. I have to cross this border every three months to stay current. It is an easy day trip by luxury bus or a multi-day fun excursion on a motorcycle, which is the option I chose this time.

Halfway to my destination, I stopped at a resort which is run by a Thai family from Bangkok. The mother had always been a baking aficionado, and she created an amazing bakery in the middle of nowhere. That is quite meaningful since Thais traditionally have never baked anything. Thai food can be boiled, stir fried or deep fried, but not baked. Until the fairly recent intrusion of western style food, there were no breads, no cakes, no pies and no ovens in Thailand. So to find a first class bakery with excellent pies and cakes is a real discovery here, especially in a resort out in the middle of nowhere.

So I had my apple pie sitting above a scenic river with a great view. The resort does not advertise, but mom’s bakery makes it a popular destination for those in the know. It is one of those hidden gems in Thailand. Then I continued on to the Thai border town of Mae Sai which, just like its Burmese sister town across the border, is mainly a market place for cheap, and mostly smuggled Chinese goods. The other big business is prostitution, also primarily supplied by smuggled in Burmese girls. My guest house had a stern warning posted in the bungalows not to get caught with those ladies of the night since they are generally illegals and underage, meaning if the police catch you with one, you go to jail and/or pay a big fine.

My guest house was located right on the river that separates Thailand and Burma. It is a small and shallow river, so you can wade across in a few minutes. The guesthouse was very charming and romantic, and getting up in the morning allowed me to soak up incredible views of the nearby mountains with the rising of the sun.

Burma is clearly a third world country whereas Thailand is a developing nation. The difference is striking. For the Burmese Thailand is the land of freedom, money and opportunity. They cross the border by the thousands, legally or illegally, to look for a better life. A lot of the manual labor and less desirable work in Thailand like construction, cleaning, and garbage disposal is done by the Burmese. Anything is better than poverty, persecution and repression by their own government in Burma.

On both sides of the border I was constantly accosted by street vendors trying to hawk cheap viagra and sexy DVDs. To the disappointment of the vendors I had no need for either. Border areas can be strange places with quite shady industries. Both border towns on the Thai and Burmese side attract lots of people – the foreigners who have to do their regular visa runs, and the Thais who are looking for shopping bargains during the day. At night the sex industry takes over which is pretty much the only game in town after 9 pm.

As soon as you leave the border towns on either the Thai or Burmese side, you start to see the real country with many scenic areas. One big tourist destination is the Golden Triangle which is a spot where Thailand, Burma and Laos meet in one point. The triangle is still there, but the gold has disappeared on the Thai side. That’s a good thing since the area was the ‘golden’ hub of opium production for a long time. Of the three countries involved only the Thais have succeeded in replacing poppy growing with tea and flower plantations.

On my way back home I stopped at another unusual gem, a brilliantly white and highly ornate temple, Wat Rong Khun. (See the picture at the top of this article.) It was built by a famous Thai artist with his own money. White temples in Thailand are highly unusual. Most Thai temples have lots of gold decoration or wooden tones. Wat Rong Khun is an artistic master piece with a really striking architecture.

Traveling in Thailand can be a real adventure if you take the time to look for the gems, be it the bakeries, the unusual temples, the caves, the waterfalls,  hotsprings,  scenic drives,  tea plantations, quaint mountain villages, or lush green ricefields. You don’t see as much of that if you travel by public transport, but if you travel by car or motorbike, there are many beautiful places to discover.