Like most people, I felt a strong urge to flee the nest right after high school and to go and experience life on my own. Going to school at a university wasn’t enough. I didn’t want to just learn about the world, I wanted to experience it. I had my mind set that the only way this was ever going to happen was if I traveled.

I wanted an experience that was unlike anything that would ever happen to me in Western civilization. I had an imaginary globe spinning around in my head and it wasn’t going to stop until I stepped foot on a plane and headed to a faraway land. Or at least that’s what I thought at the time. 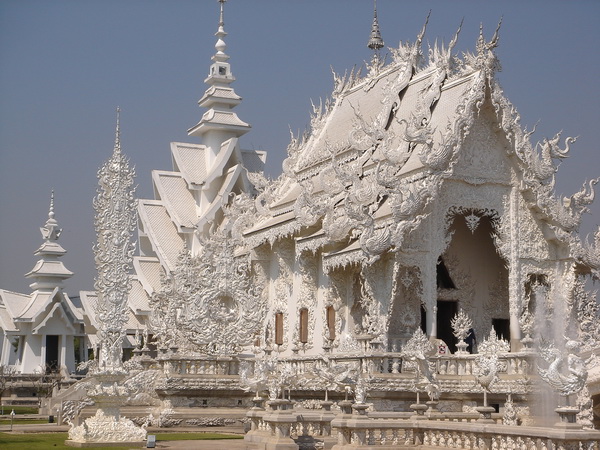 South Africa, Japan, Indonesia, Brazil! I didn’t know where I wanted to go.  I browsed traveling sites online and checked out informational books from the library.  Nothing seemed to be helping me to make up my mind. That is until I saw a picture of Wat RongKhun, or The White Temple.

Wat RongKhun was designed by Charlemchai Kosipat and isn’t scheduled to be completed until 2070, but you would never know it was still being worked on. There are particular elements of the Wat that stand out from any other temple. Instead of sticking to traditional Buddhist features, Kosipat decided to incorporate a mix of modern, ancient, eastern, and western elements. 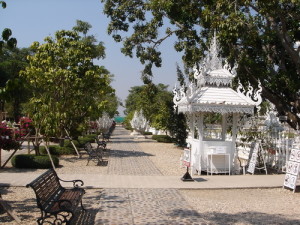 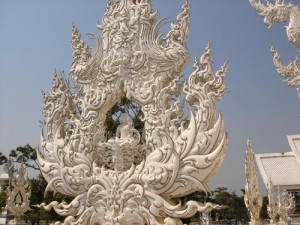 From the outside, the Wat is completely white. In pictures it looks like a porcelain house and reminds me of the china dolls I was never allowed to play with as a young girl.  Intricate, delicate and magnificent at the same time, Wat RongKhun was unlike anything I had ever seen before.

The mural inside is probably what makes this temple talked about more than others. Pictures aren’t allowed inside, but after reading about what was there, I knew I had to see it in person. Angry Birds dive-bombing the World Trade Center, Neo from the Matrix, Osama Bin Laden, and George Bush, Superman, as well as other iconic images are integrated amongst demons and traditional Thai Buddhist art.

I couldn’t think of any other place that represented both the Eastern and Western world with such clarity or artistic ability. Finally, I decided that Thailand was the perfect place for me to begin my traveling experiences.

Plus, Wat RongKhun is home to the most beautiful toilet in the world. Seriously. The building is painted in gold. I feel like that’s something that’s worth seeing on its own.

Oddly enough, the first time I went to Thailand, I never actually made it to Wat RongKhun.  I didn’t take geography into account when I decided to go to Thailand which is one of the biggest first time traveler’s mistakes.  You live and you learn, I guess. 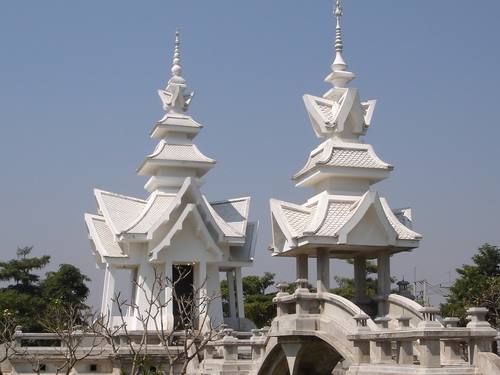 Wat RongKhun is located in Northern Thailand near a quiet town called Chiang Rai. It’s not exactly a quick trek from Bangkok where I spent the majority of my time. At first I was really upset by this but once I got to Bangkok and realized all of the exploring there was to do, I quickly forgot any disappointment.

I managed to see all of the temples in Bangkok, make a few friends, and tried food that I never thought I would. I didn’t even get scammed the entire time I was there, which surprised my family because I can be a bit naive. I’m convinced that the Thais are the friendliest people in the world which is why I went back to Thailand for a second time.  And yes, I did manage to visit Wat RongKhun on my second run.

Since my Thailand travel experience I have been fortunate enough to visit a few other places: New Zealand, Australia, Fiji, Canada; but the entire time, the globe in my head never stopped spinning. I don’t know if the globe will ever completely stop, but I do know that it occasionally slows enough for me to set my sights back on Thailand.

Meghan Pierce is a full-time daydreamer with a passion for cultural studies. Her goal is to visit every continent while writing about her experiences. You can check out her personal twitter site here: https://twitter.com/Meghanp1989

1 thought on “Why I Went To Thailand”